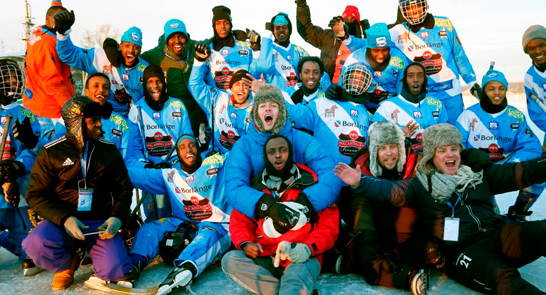 Nice people live in the Swedish town of Borlänge, if you believe the towns motto. But not all the locals appreciate the presence of a large group of Somali immigrants. In whats been dubbed the real life Cool Runnings, this heart-warming and entertaining film follows one mans attempt to bring together a community, by setting up the first national Somali bandy team. A cross between ice-hockey and soccer, learning bandy doesn’t come easy to Somalians who have never skated in their lives, but the ever-enthusiastic Patrik Andersson is confident that his team will become the first to represent Somalia in the Bandy World Championships in Siberia.

The results include cartoon-like scenes with Somalis, far from home, trying to skate for the first time, and drily comic discussions with locals who express their doubts: ‘arent Somalis traditionally rather lazy?’ Will the young men be received as heroes?

The screening will be followed by a panel discussion which will be interpreted by a BSL communicator. The panel will feature: