News From the Sun 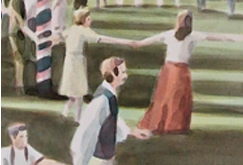 News From the Sun

Thirty years ago, a short story called News From the Sun appeared in JG Ballards collection Myths of the Near Future. Like much of his fiction, this tale of social and temporal entropy is peppered with references to solar collectors, light aircraft and relics of a defunct space programme. The story is pervaded both by a sense of nostalgia for the future (as one character describes it) and by the relentless and all consuming glare of the sun.

This exhibition brings together four artists who, in a variety of ways, display an interest in subverted or obsolete modernity, referencing technology, architecture and design that offer up optimistic promises of a utopian future. Their work can be seen to explore a sense of nostalgia for the future through references that oscillate between the aesthetics of 20th century science fiction, cold war propaganda and fin-de-siècle modernity.

Typified by references to the structures of communication technology, such as satellite dishes, pylons and antennae, much of their imagery stems from a world mediated through the screen. Distortions and visual interference bring to mind the ‘hi-tech’ media of the near-past and the speed with which it moves into outmoded obsolescence; the glow of the cathode ray tube, grainy surveillance cameras, degraded vhs and low-resolution mobile phone and web footage. Their interest in the ideal of a technologised, ‘futuristic’ society, contrasting strongly with an intensive level of handcrafted process utilised by each in the creation of their work.

Capturing something of Ballards uncanny prescience in the environmental and social effects of space-age progress and technology, there is a tangible sense of how these possible futures inevitably fail to unfold as predicted, tempered by the darker alternatives that could, and have arrived instead.

Join an informal tour of the exhibition with the curator.