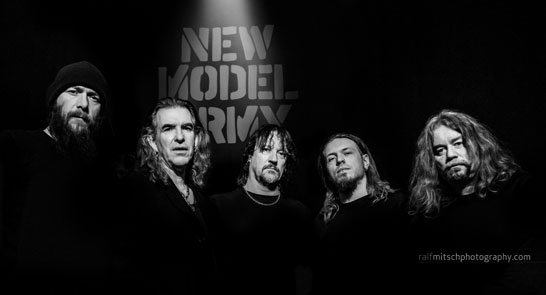 Plus support from Mad Dog Mcrea

Now into their 37th year, New Model Army show no signs of slowing down and are releasing a new studio album in Summer 2016 followed by a European tour later in the year.

Between Dog And Wolf (released in 2013 – together with its sister mini-album Between Wine And Blood in 2014), marked a major creative resurgence in the bands long story. It received some of New Model Army’s best-ever critical reviews and was their most successful album in more than 20 years, charting top 30 in UK and Germany.

Meanwhile, Matt Reids 2014 feature-length documentary movie on the band (Between Dog and Wolf – The New Model Army Story) was shown in cinemas and at film festivals across Europe and recently became available on DVD, telling the story of this most unique of bands.

And late in summer 2016 will come a new, completely different animal  the bands 14th studio album: Winter. For now, the band remain tight-lipped about its contents – except to say that theyre really looking forward to getting out and playing it live.

With all that is going on in the world, the world needs New Model Army now more than ever. If it doesnt make you stop and think about things, it will certainly make you dance and forget.
MOSHVILLE