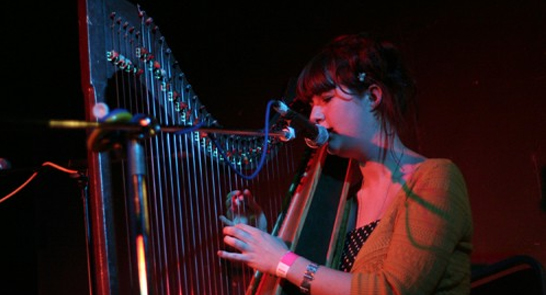 Nancy Elizabeth Cunliffe is a folk singer-songwriter and multi-instrumentalist from Manchester.

In May she releases a new album, Dancing, where she lifts off the lid of her piano, finds new emotion and harmonies in her beautiful singing voice and lets the transfixing songs drift out into this world, slowly slowly, quick, quick. Always one to  do things in her own time Nancy decided to close the doors to temptations and travel and tours and stay in her small, cold flat in Manchester, where she had a little piano, a computer and the occasional guest to sound things off. In small places epic things are dreamt up. You can hear this in all her new suite of songs.

Of the new album, Nancy says I decided to call the album Dancing because in the middle of the night, the hours when it was created, I felt very aware of the passage of time. Rhythm is time marked out by sound or movement. Time moves on and everything moves with it. Dancing is not conventional modern dance music, although it does contain some electronic elements. Its a collection of sounds and words. I hope it will inspire listeners to go out and dance, or stay in and dance.

‘The essence of Nancy Elizabeths voice, to me, is its individuality; that is, somehow in its timbre, in its pitch, her voice has the ability to capture how we experience something as individuals, and how that can be both isolating and a source of much joy.’
LAURA BARTON, THE GUARDIAN

‘Beautifully, brilliantly bare a lesson in how economy and atmospherics create true emotion Youll find it hard to drag yourself away’
MOJO

‘Her arrangements are as inspired as the songs themselves. Her use of repetition is wonderfully mesmerising, directing you to her lyrics  steamy ones, as it happens, in The Act, otherwise just two chords on an electric guitar and a bit of harmonica. But its all you need, really’
BBC

‘Dancing is certainly Nancy Elizabeths best work to date. Her previous two albums have seen her hover on the outskirts of the alternative folk scene. Dancing could well see her leap, if not into the mainstream exactly, then into a lot of peoples hearts’ ????
MUSIC OMH

‘This is wonderful stuff, haunting neo folk ballads of a gold standard’ ????
CLASH