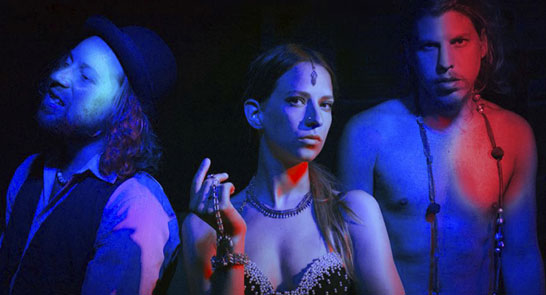 In The Club Tour

It hasnt taken long for Amsterdam based psychedelic, shamanic trio My Baby’s swampy blues and funk-inflected sound to cast a formidable spell, taking the world by storm.

Over the past 3 years, Dutch brother-sister-duo Sheik (drums) and Cato van Dyck (vocals) and New Zealand guitarist Daniel ‘daFreez’ Johnston have had their mojo working overtime and are now ready for the release of their third album Prehistoric Rhythm. With their new album, the band aim to channel a primal awareness amidst hypnotic beats, shimmering soulful vocals and psychedelic riffs on the back of rootsy blues and dubbed out funk.

With the release of their new album, My Baby endeavour to take the audience on a shamanic influenced musical journey. And pose to develop a theatrical mythopoetic yet danceable form of music that can entice, uplift and engage the listener in a way that it allows us to discover something that resides within our collective consciousness just as the characters in the songs are forever searching for a heightened spiritual and primal awareness amongst the turmoil of our modern-day society.

My Baby isnt only evolving their sound and vision to a whole new level on the album, their live show has also been completely overhauled. The combination of light, visuals and music does so much more than just bring the album to life.