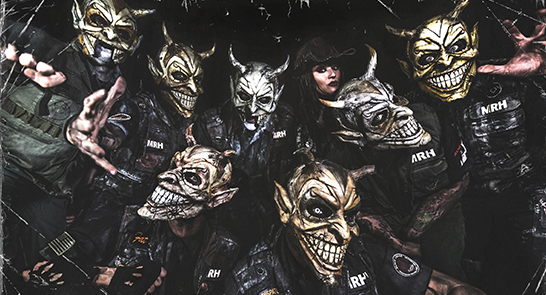 MUSHROOMHEAD are one of the most unique and adventurous alternative metal bands working today. Known for their stunningly theatrical live show and artsy masks, this innovative band has forged new ground in the rock world and influenced many other bands to push the envelope and bring art into rock. Formed in the late 80s in Cleveland Ohio, the band’s combination of metal, rock and atmospheric elements has struck a chord with thousands of fans worldwide.

MUSHROOMHEAD have been performing incognito since 1993, when drummer Skinny founded the band. The band was meant to be a side-project so they wore masks to go unrecognised, but after only a few shows they developed a rabid and loyal fan base in Cleveland. MUSHROOMHEAD released their 1995 self-titled debut album independently and it went on to became an underground hit.

It can be said that MUSHROOMHEAD’s musical ascendance was a singular, original, aesthetic of eight guys decked out in coordinated outfits and artsy masks, playing unbelievable, unsettling music. No other band was like it at the time. MUSHROOMHEAD sounded like nothing else. The band’s merging of metal, atmospheric elements, rock, and theatrics mixed with a punk DIY attitude has inspired and spawned other bands.

Even though MUSHROOMHEAD’s music is rock-leaning in thought, the group remains firmly committed to pushing the envelope and trying new things. Influences range from the driving rhythms and breakneck turns of Pantera, to the dark melodies of Faith No More, to the atmospheric stylings of Pink Floyd, but all done in MUSHROOMHEAD style.