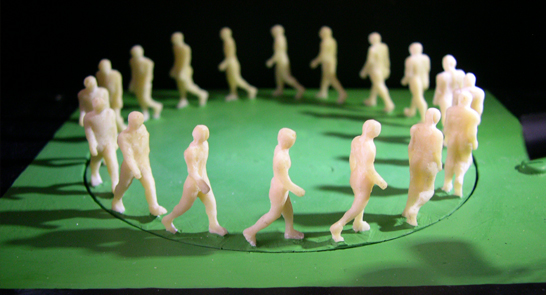 This exhibition brings together the work of four artists who, through a variety of mechanical means, transform inanimate materials into artworks that have a life of their own. By bringing the spark of life to their work in an apparent process of transformative alchemy, each could be seen to employ the magicians or thaumaturgists – tools of spectacle, illusion and the power of wonder. Through a potent and creative mix of motion, engineering, technology & mathematics these artists explore relationships between art & science, man & machine, chaos & order.

Ivan Black uses repetition of form to create mathematical and geometric sculptures which use movement to explore his fascination with fluid geometry.

Bálint Bolygó creates mechanisms animated by natural universal forces and the unpredictability of the human touch, which often result in their own act of creation.

Tim Lewis automated sculptures react to people and the environment, exploring and questioning perceptions of the world around us.