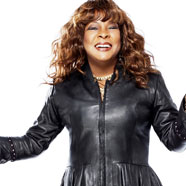 We have just received this news from the promoter of this event.

A message from Hold It Down promotions:

‘Thursdays show at The Phoenix with Martha Reeves will include her full band with the exception of her backing singers i.e. The Vandellas. We are sorry for any inconvenience or disappointment but Martha Reeves and her band will still put on a great show.’

Although we’re confident that it’s going to be a really great night, Exeter Phoenix appreciate that some of our customers will be disappointed and have been working with the promoter so that we are able to offer a full refund to anyone who feels let down and no longer wishes to attend.

Martha Reeves and the Vandellas were among the most successful groups of the Motown roster during the period 1963-1967. In contrast to other Motown groups such as The Supremes and The Marvelettes, Martha and the Vandellas were known for a harder, R&B sound, typified by “(Love Is Like a) Heat Wave”, “Nowhere to Run”, “Jimmy Mack” and, their signature song, “Dancing in the Street”.

During their nine-year run on the charts from 1963 to 1972, Martha and the Vandellas charted over twenty-six hits and recorded in the styles of doo-wop, R&B, pop, blues, rock and soul. Ten Vandellas songs reached the top ten of the Billboard R&B singles chart, including two R&B number ones. In 2004, Rolling Stone ranked Martha and the Vandellas #96 on their list of the 100 greatest artists of all time.