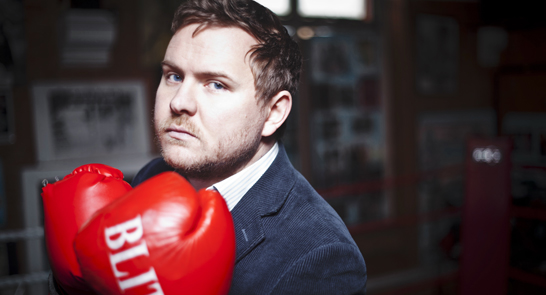 In 2012, millions watched an ex-English teacher defeat a teenage grime artist in a rap battle. But it’s a lot more complicated than that. Mark Grist (Dead Poets) has been walking the fine line between stupidity and bravery. Mid-recession, he quit his teaching job to embark on a series of challenges, leading him to become ‘an internet sensation’ (Sun) and ‘unlikely heart-throb’ (Guardian). But when teachers expressed concern about having him in to meet the kids, Mark began to wonder if in all the excitement he’d left himself behind. Warning – contains poetry.

Previous to his explosive rap battle debut, the former school teacher and poet laureate of Peterborough, performed and toured as half of Dead Poets with MC Mixy, a double act fusing spoken word with hip-hop. Dead poets appeared on BBC 6 Music with Steve Merchant, was shortlisted for the Wooda Arts Award, received six different 4 star reviews at Edinburgh and went on to tour nationally with Phrased and Confused.

To witness the film that made him an internet sensation (The Sun), click here >>

Grist’s heart is engaged and he has a great story to tell ????
THE GUARDIAN