Love is the Highest Economy 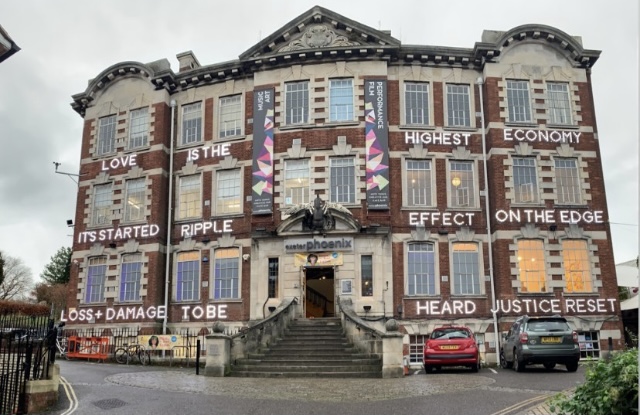 Love is the Highest Economy

Exeter Phoenix are proud to host this extraordinary series of artworks on the façade of our building that function both as alternative Christmas lights and as urgent reminders of the steps we all need to take in tackling the climate crisis.

LOVE IS THE HIGHEST ECONOMY is a series of low voltage LED, illuminated text sculptures, originally installed by Still/Moving at different locations around Glasgow for the duration of the recent COP26 conference. The works were made with various community groups around the country during 2021, as well as indigenous representatives and leaders, and with delegates at COP itself.

Here, they are presented together for the first time as a message of hope and caution at a time of year when ideas of peace, goodwill and love come into tension with conspicuous consumption and excess.

LOVE IS THE HIGEST ECONOMY comes from the powerful and moving words written and performed by the author Ben Okri with his partner Charlotte Jarvis on the penultimate day of COP26 in Glasgow.

You can read Ben Okri’s performance speech in full here.

Still/Moving is composed of three artists, Laura Hopes, Martin Hampton and Léonie Hampton, who met when they were 13. Living in Devon, UK, their collective practice aims to create social and ecological change through questioning established modes of thinking and behaviour. Projects are developed through a process of collaborative and participatory dialogue and activity among each other and with partner communities. Inspired by the artist Louise Bourgeois who said ‘It is not about the medium, it is about what you are trying to say’, their work emerges in diverse forms, including sculpture, film, photography, performance, installation, the spoken and printed word.

Léonie has an internationally acclaimed fine art practice. She studied Art history, specialising in contemporary European and American art, and is a part time MA Photography tutor at LCC London. Martin is an award-winning filmmaker who co-founded Squint/Opera with architect Will Alsop. He studied Architecture at The Bartlett, UCL, specialising in speculative designs for extreme locations such as the moon and intertidal zones. Laura is an artist and AHRC funded PhD candidate, whose research project focuses upon the relationship between climate change and colonisation.