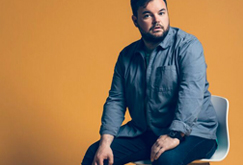 After the success of his sold out 2017/18 UK tour, comedian, choirboy and host of Soccer AM, Lloyd Griffith is back on the road with his hilarious new stand-up show. Expect jokes, dubious impressions, jokes, a bit of choral singing, jokes, maybe a fact about a Cathedral, jokes and probably the story about about that time he had a toilet incident on the A46.

‘Lloyd bounces off the audience and has everyone laughing along with him. This is an hour of uplifting stand-up thatll have you smiling for days. A warm, relatable and hilarious show’
???? THE SUNDAY POST

Lloyd Griffith has to be my favourite find from this show. It’s not often you get a comic and a choirboy rolled into one, and he’s seriously talented in both areas
LEICESTER MERCURY