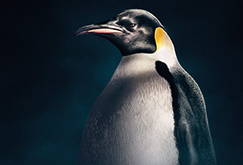 Hear tales from the extraordinary career of a maker of David Attenboroughs Dynasties series. Will Lawson directed the Emperor episode that followed penguins, and is assistant producer of the forthcoming Frozen Planet II. The event is presented by Professor Steve Simpson from the University of Exeter. He was an Academic Advisor and featured scientist in Blue Planet 2.

In this free online event, Will is sharing images and stories from the making of Emperor, a film which struck a chord with viewers across the world for its intimate examination of the birds life cycle, which brought natures instinct for survival into sharp focus. The film also made headlines for the crews unusual decision to intervene with its subjects, when they stepped in to save trapped birds. After the filming ended, Will stayed in the antarctic to run a marathon.

Will has also worked on BBC programmes such as Africa, The Watches (Springwatch, Autumnwatch, Winterwatch), Patagonia, Wild West and Planet Earth II, as well as Yellowstone Live and Earth Live, for National Geographic. Before his work in television, Will helped establish BiomimicrySA (South Africa), and worked as a game ranger in Southern Africa for 7 years, an experience which laid the foundations for his work in Natural History programme making.

This is a free event, hosted on Zoom. You do not need a Zoom account to take part, but registration is necessary.