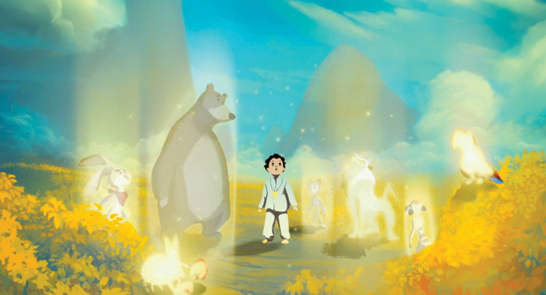 This remarkable, award-winning documentary is an unsentimental and powerful coming-of-age tale, offering a moving insight into both the experience of autism and the transformative possibilities of cinema.

Owen spent his early childhood in silence, unable to connect with people around him, unable even to convey his own thoughts or feelings. Until his family discovered a unique way of communicating and a pathway to understanding his sense of the world.

Through Disney films, Owen began to identify and empathise through characters like Simba, Jafar and Ariel. By evocatively interweaving classic Disney sequences with vérité scenes from Owens life, the film explores how this conduit for his emotions began to help him interpret reality. Meanwhile, the film’s original animation sequences beautifully expand on Owen’s interior world as he deals with the challenges of growing up.

????? ‘A feel good documentary and a must-watch’
THE GUARDIAN

Instead of false hope, it offers up possibility, the chance of a stimulus that might get past the blocks of developmental disorder.
ROLLING STONE

A captivating portrait of a young man for whom Disney animated movies have provided a powerful lifeline to progress, language and understanding.
VARIETY