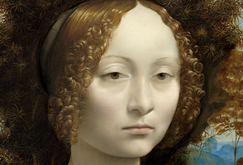 EXHIBITION ON SCREEN is the ground-breaking series of award-winning films that brings the worlds greatest exhibitions, artists and galleries to cinemas around the world. Granted exclusive access, past productions have included Matisse from Tate Modern and MoMa, Painting the Modern Garden from the Royal Academy of Arts, and Vincent van Gogh: A New Way of Seeing from the Van Gogh Museum.

To date, EOS has worked with more than 40 major institutions around the world. Seasons 1-6, with a total of 22 feature films, have played in almost 70 countries worldwide with more than 2 million tickets sold.

‘Wake up to a new way of seeing art’
GQ

Leonardo da Vinci is acclaimed as the worlds favourite artist. Many TV shows and feature films have showcased this extraordinary genius but often not examined closely enough is the most crucial element of all: his art. Leonardos peerless paintings and drawings will be the focus of Leonardo: The Works, as EXHIBITION ON SCREEN presents every single attributed painting, in Ultra HD quality, never seen before on the big screen.

Key works include The Mona Lisa, The Last Supper, Lady with an Ermine, Ginevra de Benci, Madonna Litta, Virgin of the Rocks, and more than a dozen others. This film also looks afresh at Leonardos life  his inventiveness, his sculptural skills, his military foresight and his ability to navigate the treacherous politics of the day  through the prism of his art.

To be released on the 500th anniversary of his death, this is the definitive film about Leonardo: the first to truly tell the whole story.

Enjoy breakfast in our Café Bar before the screening on Tue 12 Nov.