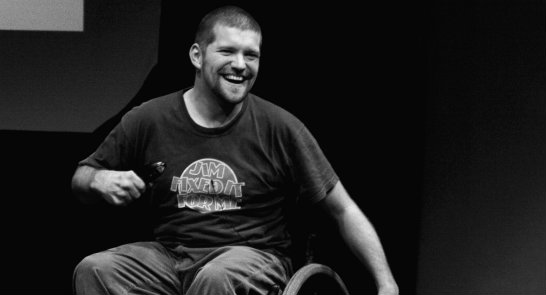 Find out why Laurence – star of BBC1’s documentary We Won’t Drop The Baby – hates being called ‘inspirational’. From mountain climbing to Doctor Who, via the Swedish chef from The Muppets, this inimitable comedian sorts out once and for all whats truly inspiring. Expect absurd logic, death defying stunts and unusual varieties of crisps. If youre sceptical when told to climb every mountain, reach for the skies and follow your dreams, then this is definitely the show for you!

With regular TV and radio appearances, and solo shows which have taken him from the Netherlands to Philadelphia and Adelaide, Laurence has been awarded Britains Funniest New Comedian (Shortlist Magazine) and runner up in the Amused Moose Laughter Awards at the Edinburgh Fringe. This year he has been invited to appear at Kilkennys internationally acclaimed Catlaughs Festival.

‘Stupendously funny … a wit drier than the Navajo desert and scores upon scores of fizzingly funny one-liners. Must See!’
THE STAGE

‘Irreverent, pertinent – a humorous hour that leaves you looking at the world in a different light’
EVENING STANDARD