King Porter Stomp & By The Rivers 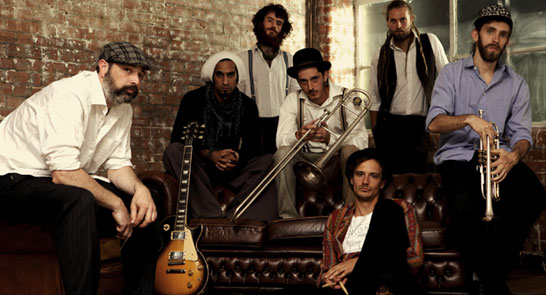 King Porter Stomp & By The Rivers

If youve ever seen King Porter Stomp busking on street corners, in packed festival tents or in major venues round the UK, youll know that these boys came to party. King Porter Stomp bring together their own unique union of ska-funk-dub and afrobeat and top it all off with cleverly crafted conscious rhymes. With massive horn lines, heavy bass and intricate guitar work, they have pulled on heart strings and won over the dancing feet of crowds across the UK and into Europe. Renowned for their eclectic and energetic live shows, the seven piece are now ready to release their eagerly anticipated second album Shuffle in the summer of 2012.

2011 saw King Porter Stomps public profile raised significantly with a commission from Shakespeares Globe Theatre in London to co-write and perform the music for a brand new contemporary production which ran throughout August and September. With superb major press reviews, King Porter Stomp made their music accessible to brand new audiences. With a full UK tour in the Autumn and the recent video Let It All Out quickly gaining over 10,000 views, King Porter Stomp have laid strong foundations for 2012. Their blistering second album is ready for release, the brand new single Hot Coals is making waves and King Porter Stomp are at the absolute top of their game.

‘Energising, a blast!’
THE INDEPENDENT ON SUNDAY

Not a band to be easily defined. Their eponymous debut album demonstrates influences of the melodies of Soul & Motown, the grooves from Funk & Afro-Beat, and the fun from Ska and Pop, with a blazing brass section which accents, stabs, and sways its way alongside the catchy vocals and laid-back melodies.