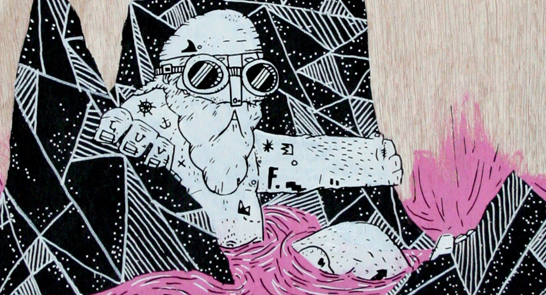 A selection of original paintings and screen- prints by Joel Millerchip, depicting scenes of humour and poolside drama using found materials and wooden panels; a multi textured glimpse into the world of the Black Rock Swim Club.

Joel Millerchip is an Illustrator from Suffolk. His bold black and white illustrations are full of characters exploring the humour in everyday situations. Hand-drawn alter-egos brave enough to take risks he himself would never dream of. Joel has been working with Exeter based art shop and collective No Guts No Glory since 2010 applying his characteristic style to t-shirts, as well as the wall mural in the shop.

Come and celebrate the DIY values of The Black Rock Swim Club at Exeter Phoenix on the 11th February 2014, from 7pm with live music in the Café Bar from Falmouth based surf-punk band The Red Cords as well as live drawing from the marvelous Joel Millerchip himself!