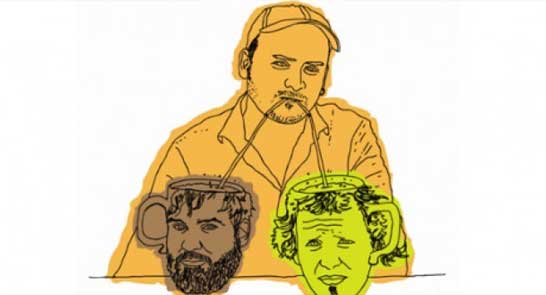 Yorkston has reached a state of grace that writers can spend forever trying to attain: songs that sound not so much written as carefully retrieved from your own subconscious, playing with an intuition bordering on telepathy.
THE TIMES

Resident of the East Neuk of Fife, James Yorkston has been releasing a series of much acclaimed albums since 2001 and has toured the UK, North America and Europe for the last ten years, building a loyal and dedicated following. A popular figure in the contemporary music world and integral member of the much-lauded Fence Collective, his style shows a mastery of folk traditions, often drawing on traditional songs, which has seen him collaborate with such heritage artists as the Waterson family, Martin Carthy and Bert Jansch.

The Pictish Trail is the nom de plume of Johnny Lynch, a Scottish musician who also runs Fence Records alongside Kenny Anderson (King Creosote). His music is a sonorous mixture of acoustic-driven balladry and lo-fi synthesised pop, that has been described as ‘a post-summer trove of sun-warped electro, anamorphic folk’ (Plan B Magazine).

Seamus Fogarty hails from the west of Ireland and writes songs about mountains that steal t-shirts, women who look like dinosaurs and various other unfortunate incidents. His soul-stirring debut album, God Damn You Mountain, was released on Fence Records in the spring of 2012.