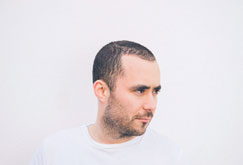 Starting his creative career in music on the acoustic-folk scene that has seen the likes of Ben Howard and Lucy Rose rise to prominence, Jake Morleys influences and growth as a musician have led him to new depths and directions.

A rare and unusual talent, Jake Morley made waves with a musical style to drop your jaw, tapping and slapping an acoustic guitar on his lap as if playing the guitar, piano and drums combined whilst singing.

Sell-out headline gigs and the release of a critically-acclaimed debut EP This City were followed by major support slots for The Hoosiers and Nizlopi. A full debut album, Many Fish To Fry was released in February 2011, launched with a sell-out gig at Londons famous Bush Hall.

Veering from hilarious to heartbreaking, this is one of the most distinctive and interesting songwriters in the UK at the top of his game.

Jake Morley is not just your average bloke with guitar, he stuns crowds with his unique style and is always a show stealer.
BBC INTRODUCING

Its phenomenal to watch him but its still more daunting to consider that he also sings up a storm and writes cracking songs.  Morley is a true original
ACOUSTIC MAGAZINE

Mesmerizing! Jake Morley is a unique talent. one to keep an eye on!
MUSICRIOT