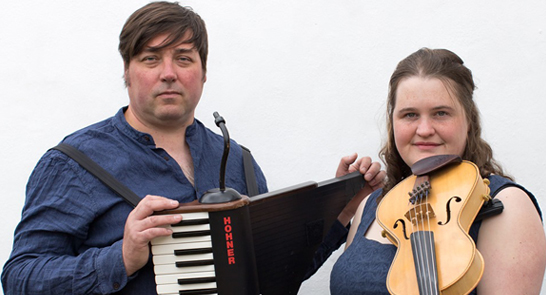 This event was originally scheduled for Sun 5 Apr but has been rescheduled to Sun 13 Dec due to COVID-19.

Multi award winning contemporary folk duo Jackie Oates and John Spiers meld together their love of English traditional folk tunes and songs with their voices and acoustic instruments, resulting in a fresh sound that is uplifting, joyful and poignant. John and Jackie, already admiring of each others’ work, met through the vibrant folk scene of Oxford and its surrounding villages, after Jackie moved to the area in 2011.

They began playing music together shortly after, through regular appearances at Nettlebed Folk Club, special festival sets, a live set for BBC Radio 3 and Johns contribution to Jackie’s 7th album ‘The Joy of Living‘. Jackie and John are looking forward to introducing their new music to audiences beyond Oxfordshire and recording a full length album during early 2020.