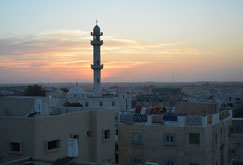 A documentary film by Yiannis Kanakis

Rahat and Laqiya are two of the seven Bedouin townships built by the Israeli authorities from the early 1970s onwards to settle the semi-nomadic Arab Palestinian Bedouin population of the Naqab. Sedentarisation has meant drastic changes to Bedouin lifestyles, customs and traditions. How have the young and old coped with this forced shift to urban life?

The film screening will be accompanied by the exhibition opening of On Palestine.

On Palestine, an exhibition of photographs by Annie Pfingst, apprehends landscapes of ruination and geographies of resistance, including the remains of 1948 Palestinian villages, the Wall, the Occupied West Bank and East Jerusalem, and the Naqab.

The exhibition will be shown from:

Organised by the European Centre for Palestine Studies, Institute of Arab & Islamic Studies, University of Exeter

Funded by the Arts and Humanities Research Council (AHRC) as part of the research project Gender and Settler Colonialism: Womens Oral Histories in the Naqab