SOLD OUT | One Day Course 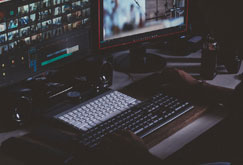 Film editing is now something that anyone can do at home to a basic level, however to take it to a professional level and understand what works and what doesnt, takes the same amount of dedication and awareness as any other art form.

This course will get you started in digital editing  from the basics of file types and imports to learning to edit with story, music, rhythm, pace and performance in mind. Youll be able to hone the almost infinite possibilities of your footage to create a desired effect and a cohesive whole. Suitable for those looking to create video content for a company or filmmakers look to expand their skill set.

The session is taught on mac computers with Adobe Premiere Pro, however a majority of the skills taught are transferable to other platforms and software.

TUTOR
Ashley Thorpe is a professional filmmaking and FX editor based in Exeter.