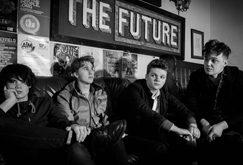 Fantastic hooks and melodies, a staggering live show and a healthy dose of organised chaos gives you just a glimpse into the world of RedFaces. A gang of lifelong friends from Sheffield who have immersed themselves in the classics, drawing influence from the 50s, right through to the present day – they are quickly winning fans, friends and plaudits across the UK and are quite rightly becoming one of the most talked about bands in the country.

Following a ground swell of support from the likes of John Kennedy and Jo Good at XFM, Steve Lamacq on BBC6 Music, BBC Introducing locally and Huw Stephens on Radio 1  RedFaces signed with legendary label RCA in the middle of 2015.

After a hectic touring schedule from Summer 2015 onwards, including Tramlines, Y-Not, Leeds and T In The Park, as well as tour supports with The Strypes and The Courteeners, 2016 has been all about the studio, as the band immerse themselves in the process of writing and recording their debut release.

With live outings being pounced upon by an ever growing fan base, desperate to be part of the adventure, exciting times now lie ahead for this un-ignorable four piece.