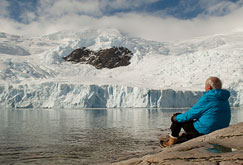 Luc Jacquet (March of the Penguins) returns to the Antarctic to tell the life story of climatologist Claude Lorius, now in his 80s, who has spent his life studying icescapes, and whose resulting analysis proved key in linking climate change and greenhouse gases.

He tells of our planet’s history and of our future – a future inextricably linked with mankind’s impact on our planet. A unique – profoundly human – scientific adventure, this is the story of a lifetime devoted to pursuing the vital secrets of existence hidden at the heart of a frozen world.

Jeff is a doctor of Climate Science working in the Met Office towards a better understanding of ice sheets and mountain glaciers, and their likely contribution to future global sea-level rise. After the screening, join him for a discussion about Antarctica and hear about his personal experiences in the field.

Small Wonders follows microbiologist Terence Prestons 50 year scientific journey into discovering how single-celled organisms move at the air-water interface. The film provides a rare and humorous insight into this hidden amoebae world. Its centrepiece is an hypnotic 16mm film of a groundbreaking experiment shot by Preston in 1972 edited with found footage of people acting in amoebae-like ways.