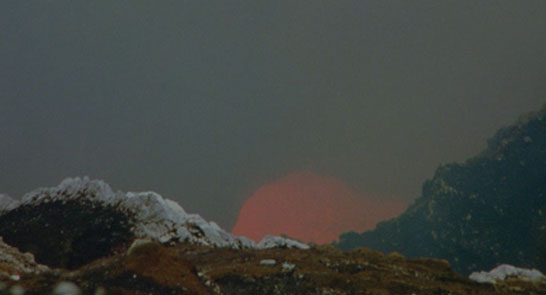 Ben Rivers work captures human interactions with remote landscapes and far off places, often referencing cinematic genres and iconography. This programme of films features the recent There Is a Happy Land Further Awaay [sic] (2015) and Things (2014), alongside two shorter early works, The Coming Race (2007) and A World Rattled of Habit (2008).

This screening is presented as part of the ICA Moving Image Network.

Artist and filmmaker Ben Rivers was born in Somerset in 1972 and is now based in London. He studied Fine Art at Falmouth School of Art, initially in the sculpture department before moving into photography and super-8 filmmaking. Since completing his degree, he has worked mainly with hand-processed 16mm film and is largely self-taught in this regard. In 1996, he co-founded the Brighton Cinemathèque, which he co-programmed until its demise in 2006.

His practice as a filmmaker treads the line between documentary and fiction. Often filming people who have in some way separated themselves from society, Rivers uses this raw footage as a starting point to construct oblique narratives that imagine alternative existences in marginal worlds.