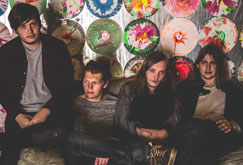 Fresh from supporting Sunset Sons, Haunt The Woods are looking forward to an exciting 2016. Last years highlights included supporting Dry the River, a main stage performance at Boardmasters festival, packing out monthly residency shows at the Plymouth Bbar, and an appearance on Chris Evans TFI Friday.

Haunt the Woods are an alternative folk rock band hailing from Devon and Cornwall. With a new and unique sound that combines their love of traditional and modern folk music along with gorgeous harmonies and spellbinding guitar, their live show really captures the energy and essence of the bands love and passion for music.

Joining Haunt the Woods is one of the fastest up & coming Australian talents indie musician & songwriter Hein Cooper.

Fresh from supporting James Bay in Australia and after a year of touring the world and developing his craft, Sydney based singer/songwriter Hein Cooper enters 2016 with bold intent in the lead up to the release of his much anticipated debut album, The Art of Escape.

The album comes off the heels of Coopers debut EP in 2015 (released on Indica Records), which serves as a teaser for what we can expect off the full length. Both records were recorded and produced in Montreal, Canada, with Marcus Paquin who has worked with the likes of Local Natives, Arcade Fire and The National.

Recently a featured on Triple Js Unearthed Series Heins blend of indie pop/folk, 2016 is shaping up to be a big year for Hein, who returns to the UK next month for a mini South West tour, The Great Escape Festival and a main stage slot at Boardmasters Festival in August.

Joining Hein will be 18 year old Cornwall based singer songwriter Charlie Bowdery who recently support Rozi Plain on her ‘Introducing’ tour. Already a favourite with BBC Introducing we are delighted that Charlie could step in at the last minute to replace Ten Tonnes (Ethan Barnett), who due to unforeseen circumstances could not make the tour.