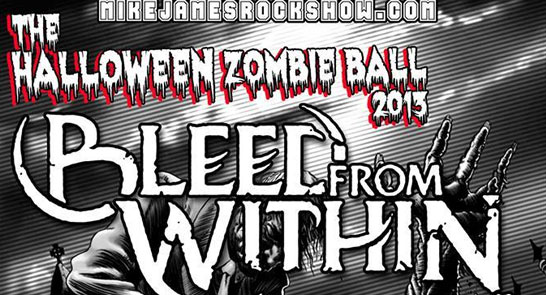 Growing year on year the Halloween Zombie Ball has is back for the 4th time, boasting the biggest and strongest line up to date. On Saturday 26th October 2013 at Exeter Phoenix, straight after the annual Zombie Walk through Exeter City Centre.

These Scottish metal new boys have gone from strength to strength in the last year or so,  gaining main support slots with Suicide Silence, All That Remains, Soilwork, Testament and their childhood idols Megadeth.

Their new album “Uprising” is already being tipped as one of the Albums Of The Year having signed with Century Media and now they will be headlining the Halloween Zombie Ball 2013 before heading out on the Defenders Of The Faith Tour with Amon Amarth.

If you have seen these boys live this year you’ll understand why they are main support to Bleed From Within at this years event. They are simply one of the most energetic and entertaining live band on the South West scene. Their sound combines catchy southern riffs,hardcore groove and brutal breakdowns and they were the first metal band to perform a live session for BBC Radio Devon Introducing.

The 12 legged behemoth that is Condemned have been representing the South West all around the UK this year. They use 8 strings, blast beats and violent vocals to create absolute chaos.

These young guys opened up the second stage at last years Halloween Zombie Ball with a blistering set. In the past 12 months they have released the Possession EP which is lyrically based on political corruption and demonic possession. The band have shared the stage with bands such as Evile, Revoker and Romeo Must Die and have played countless shows including a tour with Cryostorm.

They are fully ready to rip it up on the main stage this year.

Elithia, formed from humble beginnings deep in the South West of England, are 5 like-minded individuals who have a passion for heavy music. Their turbulent sound combines influences such as Architects, Within the Ruins and Veil of Maya, offering a new, refreshing perspective on the modern Metal/Hardcore movement.

Within months of their conception, Elithia accelerated on to the local scene by winning the Plymouth Battle of the Bands 2010 and began to span out of their hometown, strengthening their chaotic live show. With the release of two free digital singles recorded with Stu Mckay at Studio 6 and a brand new EP due to drop later this year, Elithia are making their mark on the UK.

After a well received set at this years Takedown Festival and having already shared the stage with the likes of Lower than Atlantis, Bleed From Within, Napoleon, Heart In Hand and Heart of a Coward, the band are booked on a two week tour of the UK in October to follow the release of their debut EP.

Having blasted their way back on to the South West scene in 2013 with a new front man, new material and a desire to spread their brand of politically charged tech/groove metal Codex are on fire at the moment. Codex promises a powerful and energetic stage performance with a no-holds-barred attitude, backed up by a hunger to strive forwards with their eyes always set on dominating the UK and International Metal scene.

Born Of The Jackal

‘100% pure British metal’ is what it says on their website and once you see thir live set it’s hard to disagree. Founded from the love of real music in an otherwise image obsessed industry. Born Of The Jackal strive to bring back the foundations of real metal and take the world by storm as their influences had done before them! Go grab their EP and then go nuts as they bring you to boiling point.

The Mysterious Freak Show will host a Steam Punk style party. They are a collection of marvelous loons making music and mayhem in the Moonlight! Their sound is difficult to define but is quite Goth /Rock with a splash of Punk & SKA! They take influence from the likes of Siouxsie & The Banshees, Cocteau Twins, The Cure, Kate Bush, The Clash, The Sundays, Manu Chao, The Pixies, Portishead, Massive Attack, The Prodigy, Sinead O’Connor, The Gossip, Skunk Anansie, The Penny Black Remedy, Slayer, Motorhead … well the list it go on and on and on … needless to say they really LOVE Music of all genres. And there will be a host of live acts and sinister shenanigans going on in that room.

This year between the band on the main stage we have invited Dead Good Films Like Productions to show some of the best underground shorts from the region. Started in 2008 as a DIY independent film production company, they specialise in Cheap & Trashy Horror / Exploitation films such as Dracula Vs The Ninja on the Moon, Brutal Jesus & the House of Wasted Youth, Wrath of the Violent Vicar. These movies where made on tiny to zero budgets and gained a growing audience worldwide. Alongside producing and distributing the above mentioned title’s with bigger Projects such as the Award winning SHE’s DEAD and the Critically acclaimed exploitation film MRFD.

After the live music, the bar will stay open late with a guest DJ slot from the IDIOM DJ’s with full sound system and lights.

There will be added attractions like magicians, ventriloquist, band merch stalls, Trick n Treats and more acts to be announce from a huge competition run through the www.mikejamesrockshow.com.

And don’t forget the Zombie Walk before the Ball through the City Centre.