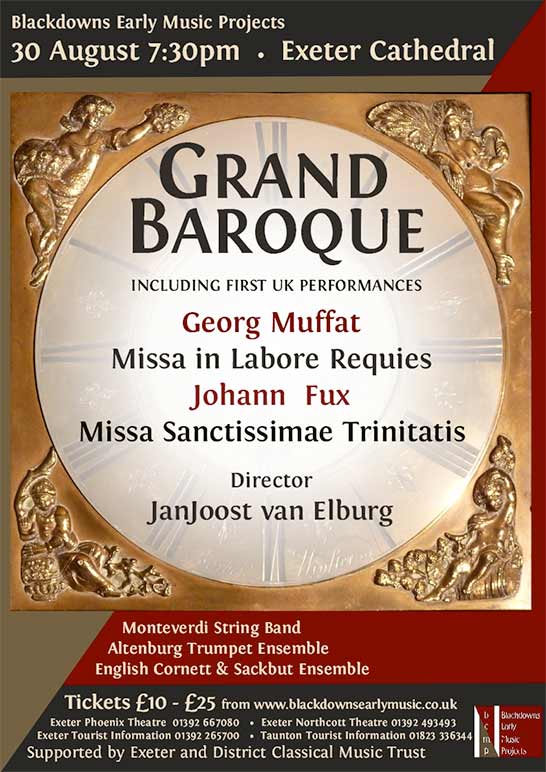 Two UK premiere performances of large-scale baroque choral works will be performed in Exeter Cathedral on Friday August 30th 2013, by an impressive line-up of internationally renowned instrumentalists and vocalists. Appropriately, the concert is called ‘Grand Baroque.’

The bigger choral work is Missa in Labore Requies by Georg Muffat (1653-1704)  a cosmopolitan musician of French/Scottish parentage who spent the majority of his working life in German speaking countries. While the majority of Muffats compositions are for keyboard and chamber ensembles, his sole surviving large scale choral work was written during his time in Salzburg, possibly for the enthronement of Archbishop Ernst in August 1687, employing the full range of baroque instrumentation to colourful effect.

The other UK premiere is the 1693 Missa Sanctissimae Trinitatis by Johann J. Fux (1660-1741), remembered as a fine composer and the author of a definitive treatise on Renaissance counterpoint used by Bach, Handel, Mozart and Beethoven which even today is a mainstay of college curricula. This work received its first modern day performance in Amsterdam last autumn when JanJoost van Elburg prepared it for performance by his Dutch choir Lelikoor. Fux wrote the work for Vienna Cathedral in the 1690s and although scored without trumpets, its writing for double choir, soloists, strings, winds and continuo is also truly spectacular.

The 8-part ripieno choir will again comprise hand-picked singers from Devon’s own Blackdowns Early Music Project (BEMP) drawn together from all over the UK and Holland. The authentic orchestra brings together the Monteverdi String Band, the English Cornett & Sackbut Ensemble as well as the 5-part Altenburg Trumpet Ensemble. The Dutch conductor JanJoost van Elburg (principal music director of Blackdowns Early Music Projects since 2004) will bring these dazzling works to life for the first time outside central Europe.

The concert will be another first for the three instrumental groups, who have not worked together in a major project of this kind before. The English Cornett & Sackbut Ensemble have joined forces with the Monteverdi String Band for many polychoral performances. Most fascinating is BEMPs addition of the recently formed Altenburg Ensemble, the only historical ensemble in the UK performing on real natural trumpets. This is a major move into authentic baroque performance as they will perform without the modern vent holes (which make pitching easier, but at the cost of tone quality). On August 30th, each of the individual ensembles will contribute pieces from their own specialist repertoires from central Europe to provide rich support to the programme’s choral works.

BEMPs founders, Catherine and Geoffrey Bass, have organised early music workshops and concerts in Devon and Somerset for the past ten years. They are passionate about providing performances from the less well-known early music repertoire; certainly this stylish presentation in Exeter Cathedral at 7.30 on Friday 30th August will be one not to miss.