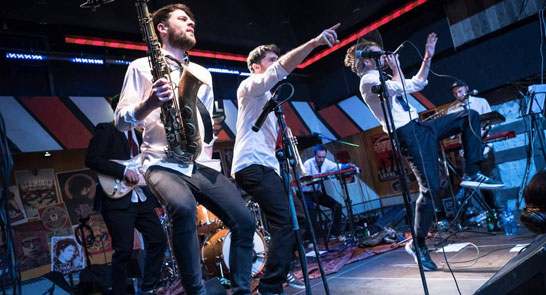 Gentlemans Dub Club was formed in 2006 in the basement of number 44 Headingley Lane, Leeds. Spurred on by the vibrant Dub scene in the city, GDC found their initial inspiration skanking in front of the mighty Iration Steppas Sound System at Leeds West Indian Centres infamous Sub Dub gathering. Since that time, Gentlemans Dub Club has become an internationally recognised live outfit with a reputation for inciting uncontrollable levels of dance floor energy on the live stage.

With their unique blend of Dub, Reggae, Ska and mayhem, the GDC have performed everywhere from Goa to Glastonbury, Bestival, V Fest, Outlook Festival Croatia and have also made their way over to the West Coast of the United States, where they finished a run of gigs in the San Francisco area performing at the Sierra Nevada World Music Festival 2015. With two albums under their belt and a number of EPs in the bag, Gentlemans Dub Club have received rotation from the UKs major Radio DJs including Zane Lowe (BBC Radio 1), Huw Stephens (BBC Radio 1), Don Letts (BBC Radio 6 Music), and the legendary selector David Rodigan MBE, who as well as being a long time supporter of the Gentlemans output, hosted a Gentlemans Dub Club Maida Vale feature on BBC Radio 1 Xtra in 2015.

Gentlemans Dub Club have supported a number of established artists such as Roots Manuva, The Streets, The Wailers, Jimmy Cliff, and Finley Quaye, and have collaborated with artists such as P Money, Natty and Solo Banton.TheBand have performed at major festivals worldwide including Glastonbury Festival (UK), Fushion Festival (Germany), Ostroda Reggae Festival (Poland), Outlook Festival (Croatia), Sula Fest (India) and have headlined legendary venues such as the Roundhouse London and PulaAmphitherther.

Plus an after party in the bar.