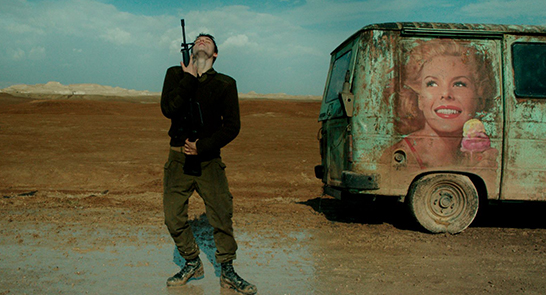 The new film from Samuel Maoz (director of 2009s Lebanon) charts the story of a troubled family in Israel who are forced to confront difficult truths when they receive shocking news from their sons desolate military post. Winner of the Grand Jury Prize at Venice Film Festival in 2017, Maozs film is a fierce nightmare and an emotional knockout whose visionary boldness dares us not to look away.

Foxtrot plays out in three acts, forming a triptych of loss, waste and grief. The first act follows a pair of parents who receive devastating news from army officials; the second a remote desert checkpoint, where their son Jonathan lives with other soldiers. The third and last act lands us back in the city, showing us in more detail how collective hurt and anger can be passed down in the bloodline.

An urgent, unflinching, yet at times heartwarming and witty picture, this Israeli drama has already been called one of the best films of the year.