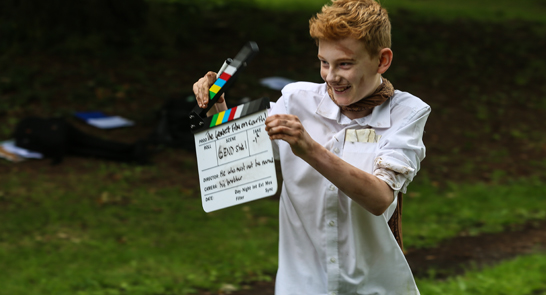 Following on from the regular annual success of Summer Film School, which has been inspiring and enabling wannabe auteurs to realise their ambitions since 2014, Four of Swords and Exeter Phoenix has introduced an exciting series of two-day workshops throughout the year entitled Film School Extra!

This February half term, Film School Extra will focus on that most precious and precarious of relationships… the connection between actor and director! The history of cinema is full of shining examples of these partnerships. Scorsese and DeNiro! Burton and Depp! But what’s the secret? How should a director get the best of their actors? How should an actor collaborate with their director? This latest Film School in the successful ongoing series from Exeter Phoenix and Four of Swords will use recreations of classic movie scenes to shed light on these dilemmas. All students will have the opportunity to both act in and direct scenes, and thereby gain valuable experience of both sides of this relationship.

Four of Swords Sarah was involved as a freelancer on the very first Summer Film School back in 2014, where she enacted the prestigious role of villainous Professor Squeak. She brought team-mate Phil on board the next year, and they have been involved in running Summer Film School, now with its accompaniment Film School Extra, ever since.

Four of Swords are joined by local film-maker Jon Seal. Jon has been teaching and directing drama and film for 40 years. His drama works have ranged from a one-man show toured around Ireland on a bike to a production of the entire Canterbury Tales with a cast of 80, an orchestra and a four-course meal. Short films include Back to Earth (Shortlisted for a Jerwood First Film Prize), Deserter and Hamster (made in partnership with Exeter Phoenix) and Kubla Khan (commissioned by Somerset Art Works). He has written and directed some 120 short films for Cambridge University Press GCSE English Literature series.