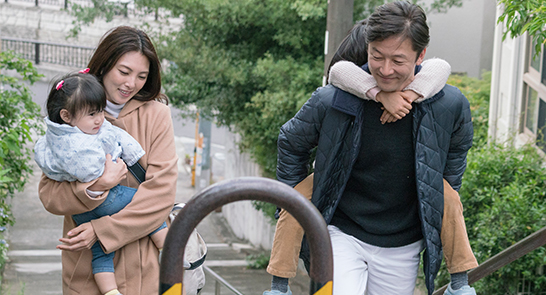 Makoto (Tadanobu Asano) is a career-driven, middle-aged patriarch of a patchwork family. Married to his second wife and unable to establish a connection with his rebellious elder step-daughter, he struggles to make time for his new family while trying to remain on good terms with his daughter from the previous marriage. Keeping all the plates spinning proves to be a herculean task as he is beset with blows in increasing frequency; soon, even his lucrative job is in jeopardy. As current wife Nanae (Rena Tanaka) announces shes carrying his child, the story delves deeper into considerations of complicated family units and the consequences of divorce and remarriage.

A Stitch of Life director, Yukiko Mishima, trifles with Japanese family drama conventions, taking fresh and unexpected trajectories in her adaptation of Kiyoshi Shigematsus 1996 novel. Winner of the Special Grand Prix of the Jury Award at the 2017 Montreal World Film Festival.

Enjoy a specially prepared two-course meal in our Café Bar before watching the film on Wed 27 Mar.

Love, in all its semblances and dimensions, is a state so universally experienced by humankind that it has provided a perpetual source of inspiration in the long history of global cinema.

The Japan Foundation Touring Film Programme 2019 features thoughtfully selected works from Japans artistic repertoire, all focusing on this theme in one way or another. As the conventional binaries defining what it means to love continually give way to new understandings of this sweeping emotion, so too does this years curation aim to provide insights into a wider context of love in Japanese society.