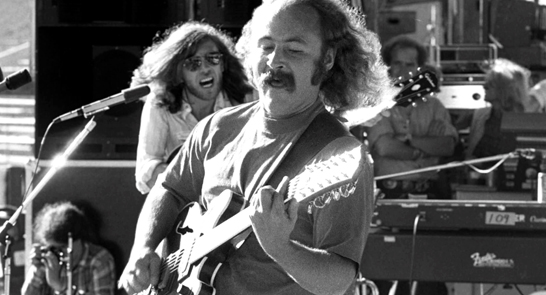 A triumph at Sundance, this inspired collaboration between director A.J. Eaton and producer Cameron Crowe coaxes Crosby into unflinching candor as the singer-songwriter confronts mortality and assesses the damage of earlier days. At the same time, his redemptive journey back to music is universally inspiring and uplifting, bearing an emotional impact that transcends the rock documentary genre.

In the illuminating twilight of his days as a living legend, Croz has chosen living over the legend. Hes making less money but more music than ever, hitting the road despite serious health issues, surrounded by young players who have helped inspire a critically-acclaimed creative streak of fresh songs, albums, and performances. As a troubled talent but uncompromising and principled spirit whose voice has been harmoniously woven into the fabric of pop culture and music royalty since the mid-1960s (first with the Byrds but most famously as a founding member of the supergroup Crosby, Stills, Nash & Young), Crosby finally distinguishes himself as a masterful raconteur and unsparingly self-aware survivor.

Taking viewers through soaring career highs, along with the chemical variety that led to ravaging addictions and serious prison time, this film explodes myths and sheds profound new light on all the music, politics, and personalities that crossed his incredible  and ongoing  path. Only Crowe and Eaton could have composed a cinematic portrait so intimate and unforgettable.

Docn Roll is the UKs Music Documentary Film Festival. It celebrates music subcultures by providing a unique platform to support the wealth of creative, compelling and unforgettable documentaries that celebrate the performers, labels, scenes and stories.

Docn Roll are passionate about independent film and music across all genres, and provide audiences with the opportunity to watch these films as they were designed to be watched: LOUD. Docn Roll Film Fest launched in 2014, convinced it was time to show some love to the under-the-radar music docs that all too often were being ignored.

Docn Roll Film Festival is supported by the BFI using funds from the National Lottery to grow audience appetite and enjoyment for a wide range of independent British and international films.