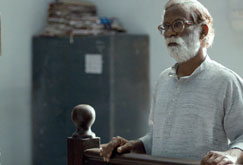 Narayan Kamble, an ageing folk singer living in Mumbai is accused of abetting a suicide when a sewerage worker is found dead after allegedly hearing Kambles seditious lyrics. With no evidence and few witnesses, events unfold in a lower Mumbai courtroom, shedding a cold light on the justice system in contemporary India. With glimpses into the private lives the lawyers, the prosecutor and the judge personal prejudices, corruption and ultimately injustice is illuminated.

Featuring a superbly understated script, brilliant ensemble cast of professional and nonprofessional actors, and a naturalistic approach Court is a riveting portrait of contemporary India told through an affecting mix of both humanity and humour.

???? ‘A humane and absorbing big-city film’
THE SUNDAY TIMES

???? Funny-cautionary picture of justice at work in Mumbai
FINANCIAL TIMES