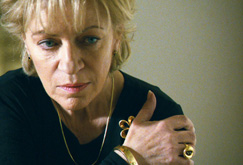 Across four Wednesdays in November, Exeter Phoenix will be hosting the Cinema of Small Nations, a series celebrating film in a uniquely European context. Highlighting some of the very best and most exciting films around, join us as we journey through the cinematic landscapes of Belgium, Scotland, Wales, and Romania.

A winner of the Golden Bear at Berlinale in 2013 and an official selection for Romania at the Oscars, Childs Pose wonderfully captures corruption in Romanian society post-Ceau?escu. As a result, this film follows in an engagingand revealing tradition of filmmaking that has emerged from Romania since at least The Death of Mr Lazarescu and 4 Months, 3 Weeks and 2 Days in the mid-2000s.

A tragic car accident leads to a dramatic change in the disaffected relationship between mother and son. 60-year old Cornelia and her 34-year old son Barbu are rarely in contact until a car accident leads to the death of a child. A dominant and controlling mother, Cornelia strives to save her son from prison, thereby exposing the rotten core of the system. A stimulating and highly engaging family drama that reveals the seedy underbelly of bureaucracy and society.

Gripping  Goes beyond the thriller genre into deeper waters
THE GUARDIAN

Consider this a must-see
IONCINEMA