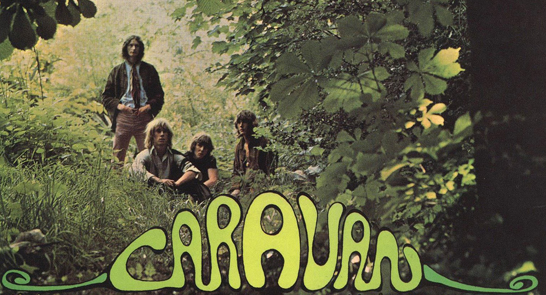 With support from Tristan Mackay

Formed in 1968, Caravan played a major part in what became known as the ‘Canterbury Scene’, a cradle for the most freewheeling British bands of the post-psychedelic era. Founders Pye Hastings, Dave Sinclair, Richard Sinclair and Richard Coughlan , had previously played at various times with a local band, The Wilde Flowers, which also featured Kevin Ayers and future Soft Machine members Robert Wyatt and Hugh Hopper.

After a 10 year break from the studio, the band are set to release their brand new album in 2014 only made possible by independent funding from fans and supporters via a highly successful PledgeMusic campaign.

The current Caravan lineup is

‘While steeped in the same British psychedelia that informed bands such as Love Children, Pink Floyd, and Tomorrow, Caravan relates a freedom of spirit and mischief along the lines of Giles & Fripp or Gong.’
ALLMUSIC

Tristan Mackay is a singer/songwriter currently living in London.

Starting out playing his songs on the streets of Leeds in West Yorkshire, Tristan was quickly noticed by the powers that be and has been featured on ‘Skins’ for C4, ‘Good Morning, Paul Jones and Alex Lester on BBC Radio 2, BBC 3’s ‘Don’t Tell The Bride, The Sun, Channel 5 News and the Evening Standard.

Having independently released two EP’s under the moniker ‘The Bedroom Orchestra’, he was discovered busking by Grammy award winning producer Martin Levan in 2010/

Featuring a fantastic line up of musicians, including organ cameos from Paul Carrack and keyboards from John Garden of ‘Scissor Sisters’, his debut album ‘Out along the wire’ was released in Feb 2012 and went straight to #1 on the I-tunes Blues album chart.