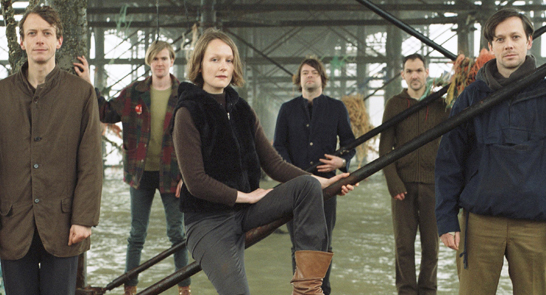 Hailed as the best band in Britain by the Sunday Times, the Brighton-based indie-rock six piece bring their 2016 tour to Exeter.

British Sea Power have played atop the Great Wall Of China, at the CERN atom-research labs and beside the diplodocus skeleton at Londons Natural History Museum. Theyve played at Londons Czech Embassy and beneath the big astronomical dish at Jodrell Bank. Theyve played on ships at sea, deep inside Cornish slate mines and at the Chelsea Flower Show. The intensity and invention of the bands shows made them Time Out magazines Live Band Of The Year in 2004.

British Sea Power are Yan, Noble, Hamilton, Wood, Abi Fry and Phil Sumner. The band began life in Cumbria, 2001, and after a few relocations gained an enormous reputation in Brighton and then Europe, as tour supports to such greats as Interpol and The Flaming Lips. By the end of 2004, they were receiving worldwide acclaim and attaining the Time Out award for Live Band Of The Year. It’s quite remarkable that in this short time, BSP have established themselves as one of Britain’s most noteworthy bands.

Fifteen years on from their first concert British Sea Power continue to make bold, galvanising, idiosyncratic marks on the world. Race horses and massive ocean-going yachts have been named after the band.  Londons National Maritime Museum recently opened a new £35m exhibition wing. Visitors are greeted by huge, sculpted quotations from Shakespeare and Coleridge  and a lyric from British Sea Power.