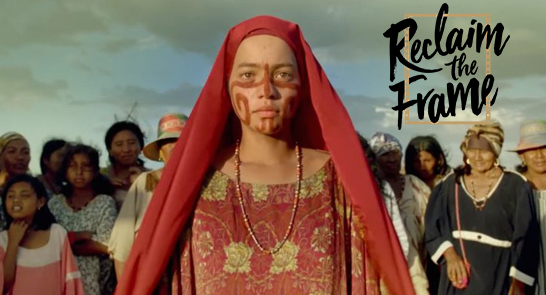 This breath-taking epic centres on the Wayúu indigenous people and the violent origins of drug trafficking from the tribes of the Colombian Guajira desert.

Torn between his desire to become a powerful man and his duty to uphold his cultures values, Rapayet enters the drug trafficking business and discovers the perks of wealth and power. Ignoring ancient omens and his tribes matriarchs disapproval, Rapayet and his family get caught up in danger and conflict where debts are paid with blood. Visually breath-taking, Birds of Passage is a fiery exploration of loyalty, greed and the erosion of tradition in pursuit of power and wealth.

This screening is part of Birds’ Eye View’s Reclaim The Frame campaign, a mission to bring ever-greater audiences to films by women, offering a wider perspective of the world.

From the filmmakers behind the Oscar-nominated EMBRACE OF THE SERPENT comes their latest epic, BIRDS OF PASSAGE, a gripping crime saga and origin story of Colombias catastrophic, decades long drugs wars. Original and authentic, it challenges the
glorification of the countrys violent recent history by chronicling the little known experience of the indigenous Wayuu people and how their way of life tragically collapsed after the drugs trade with America exploded in the late 1960s. Unfolding like a folk tale, the film reveals how women are responsible for protecting the entrancing rituals and sacred codes that bind the community together, and how these are inexorably eroded and ultimately destroyed as one man and his mother-in-law, corrupted by greed and materialism, build an international drugs empire.

Join Birds’ Eye View for an specialist extended introduction to the film from Katie Brown, Lecturer in Latin American Studies at the University of Exeter. The audience are invited to attend a post-screening workshop “Utilising the Power of Dreams” led by psychologist Christa Mackinnon.