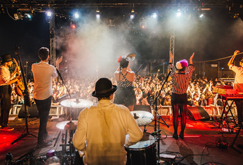 The band will be showcasing their new album. Expect a super duper fresh show with plenty of old favourites.

Influenced by New Orleans jazz, soul and hip hop, Lazy Habits have made their presence known with their own brand of hard hitting beats and slick lyrics about modern British culture and urban life.

The London based six-piece have notched up shows at legendary venues including Shepherds Bush Empire, The Roundhouse, KOKO; and toured with the likes of Mos Def, Bonobo, and Chali 2Na (Jurrasic5).

Alongside Lazy Habits memorable live festival performances at Glastonbury, Bestival and Secret Garden Party they have also sold out shows in Taiwan and Singapore, during the group’s tour of Asia in 2015. They are fast becoming a formidable, energetic and renowned international live act, and 2016 sees them returning to Asia, UK and Europe to tour their highly awaited second album.

After reaching the top 10 in the iTunes UK hip hop chart with their self-titled debut album, of which Mixmag described as ‘swish, perfectly produced’, and fans included Ghostpoet, Lazy Habits are ready to release their follow up, The Atrocity Exhibition in May 2016 with first single The Breach a welcome return, receiving radio play from BBC 6 Music.

Lost in Michael Jacksons woodland estate, young Will Williamson was a happy soul. Breast fed and reared by a family of disco Llamas, hed canter hither and tither to his hearts content, chewing on the lush grass and shrubs planted way back in the Motown days.

Until the day the bulldozers arrived to clear the estate and mine the fabled Tree of Soul. Outraged, the Llamas quickly militarised and Will found himself leading the Llama army against the machines. Sadly for Will and the Llamas, they were trained in combat by Bubbles, Michael Jacksons favourite monkey and could only offer thrown semen and faeces against their metal foe and it was over as soon as it began. But as is the way with super heroes, Will didnt die. He was spirited away and placed in a montage, where over the proceeding years he grew strong, running along beaches and up and down steps to Bill Contis Theme from Rocky

Ladies and Gentlemen. Father Funk is here! The Legend is born!

Back in 2007 Morphosis and Fat Harry teamed up and began working their musical magic to establish HKPP as one of the most vibrant, unique, and fun acts in the South West. As their popularity grew so too did the HKPP family, enlisting hip-hop maestro DJ Spinforth to the cause.

From its humble roots as the trail blazing NSB radio show Beating The Crates, to its Godzilla-like conquering of the South West club scene, HKPP has kept the three Fs, fresh, funky, and fun (and feathersno, wait) as its mantra.

Sunshine music for the masses! Exotic flavours, soulful melodies and party beats, the happy hippo always brings the sunshine no matter what the weather