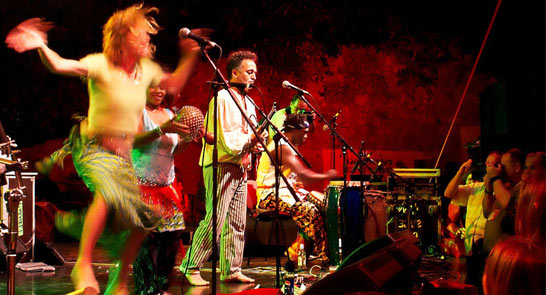 The original Afro-Celtic dance band? inspired by the music of the rain forest

After 20 years of mixing African and Celtic music in equal measures Baka Beyond has become one of the finest danceable bands around, creating the sound of the global village.

Conceived in 1992, Baka Beyond have a unique relationship with their inspiration  the Baka Pygmies of Cameroon  sending royalties to help their development projects, and even touring with Baka musicians. ??In order to make sure that the Baka get their fair return for their compositions the band founded the charity, Global Music Exchange. So started this very positive African  European collaboration.

Since these early beginnings when the term “world music” barely existed, Baka Beyond has evolved into a multicultural, dynamic live stage show with worldwide album sales. Band members have hailed from Brittany, Cameroon, Senegal, Sierra Leone, Congo, Uganda and Ghana as well as Britain. Each musician brings their own influence and talent to the music creating a unique spectacle and honoring a lesson learned from the Baka people.

?Keeping still is only an option for the dead, or those too mesmerised by the sheer joy of it all
METRO