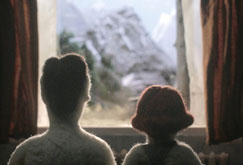 BAFTA shorts programmes are legendary for providing stunning collections of the best short live action and animated films, showcasing the nominated and winning entries for their annual, prestigious awards. With a blend of drama, shock, desire, cultural perspectives and new work from the animation genius behind Who Framed Roger Rabbit, this years collection is no disappointment. We are excited to announce that Mining Poems or Odes is the thought provoking and poetic factual short that our team selected to open the Documentary screening of Two Short Nights Film Festival 2015 and we can’t wait to see it back on our screen at Studio 74.

The highlight of the collection, as flagged by Peter Bradshaw of the Guardian is Over, by Jörn Threlfall, which is beautifully shot by Richard Mott and has a superb, forensic clarity and control, building to a genuinely shocking denouement. Creating the ultimate evening of short film and debate.

Edmonds impulse to love and be close to others is strong maybe too strong. As he stands alone by a lake contemplating his options, he goes on a journey backwards through his life, and revisits all his defining moments in search for the origin of his desires.

This is the story of Shmilu, a Hasidic Jew in crisis, torn between his community and the romantic possibilities of trendy east London. The first fictional film made with the UKs Hasidic population, Samuel-613 has unprecedented access including non-professional actors and Yiddish dialogue. It explores culture clash, identity struggles and their spiritual consequences.

An Emergency Services Operator receives a call from Gemma, a desperate young mother whose three-year-old son is trapped upstairs in a burning house. Flames are creeping down the stairs that Gemma must use in order to reach him. The operators guidance is all that Gemma can rely on in order to survive.

A young girl witnesses a battle to the death. From the animation genius behind Who Framed Roger Rabbit.

Robert, an ex-shipyard welder from Govan in Glasgow, has put aside his tools for pen and paper. Reflecting on how his life experiences have influenced his new found compulsion to write, his retrospective poetry reveals a man who is trying to achieve a state of contentment through words and philosophy.

Glen is barely a man. In a desperate attempt to tap into his masculinity he attends a primal scream therapy session, though even surrounded by wailing men he cannot make a sound. But when Glen is pushed too far, he releases something from deep within that knows no limits.

Over presents a crime scene. During the course of nine wide shots, told in reverse order, we watch an intriguing story unfold. What has happened in this quiet neighbourhood? A murder, a hit and run, an accident? The reality is profound and deeply unexpected.