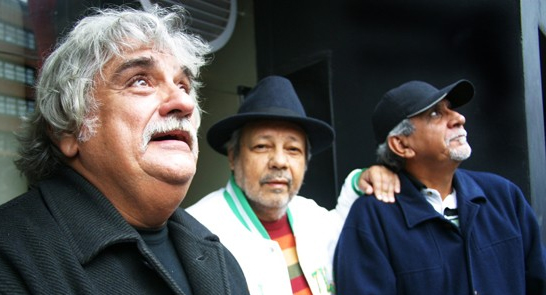 AZYMUTH: The original Light As A Feather Album line-up trio

Azymuth return in 2013 for a full world tour playing their most famous album, 1979’s Light as a Feather, in full for the first time. The album took Azymuth to international fame with a string of hit singles taken from it including Jazz Carnival. Combining funk, soul and jazz with samba, Azymuth are the legendary Brazilian three-piece orchestra who were responsible for creating a new sound and genre of their own ­ Samba Doido (Crazy Samba). Jose Roberto Bertrami, Ivan Conti and Alex Malheiros made up the trio originally ­ legendary musicians who together have released over 20 albums in four decades and who, since reforming in 1995, have delighted their fan base with their outstanding albums for Far Out.

The record is set to be re issued by Far out Recordings and include unreleased tracks from the sessions as well as remixes from the likes of Theo Parrish and Ashley Beadle.

‘Arguably the most successful band out of Brazil’
SONGLINES