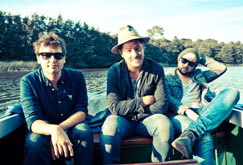 New York-based indie-rock trio Augustines (formerly We Are Augustines) have been making a name for themselves with their intense, freewheeling and passionate shows, which have been known to sell out in minutes. Made up of guitarist Billy McCarthy, multi-instrumentalist Eric Sanderson and drummer Rob Allen, the bands first album became iTunes Alternative Album of the Year in 2011.

A knee-buckling power, and jaw-dropping grace its exciting to have a band like this, with a future as bright, battling the negativity, kicking against the horror, surging towards glory.
DROWNED IN SOUND