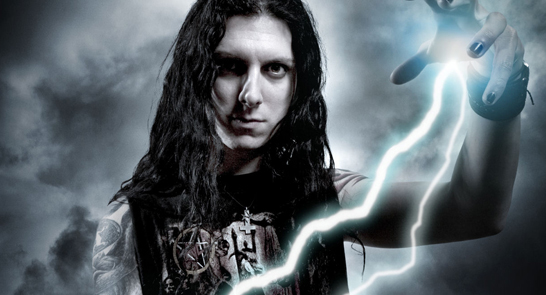 What is Heavy Metal? What does it taste like? Does it hurt?

Andrew O’Neill answers all the questions you were afraid to ask the big hairy men in that pub you’ve always avoided. Whether you’re a committed headbanger or the type of person that wouldn’t know Napalm Death if they were squatting in your garden shed, this show is hugely funny and massively entertaining.

Combining stand-up comedy with live music played on his customised Flying V guitar, O’Neill paints a picture of a subculture and history that has rocked the world.

Andrew O’Neill has been perfoming stand-up comedy around the world for over a decade. He has appeared on TV on Never Mind The Buzzcocks and Steve Coogan’s prog-rock sitcom Saxondale, he’s hosted the Metal Hammer Golden Gods award ceremony with Alice Cooper, played Download, Sonsisphere, Bloodstock and Leeds and Reading and his lifetime of headbanging has left a neck so thick he can’t buy shirts that fit him.

Even heads that do not bang will hugely enjoy this Heavy Metal 101 by one of the world’s most original and consistently hilarious stand-up comedians.

‘Its hard to pigenonhole a comedian who one minute jauntily rewrites classic pop songs for the colour-blind, and the next rumbles intimidating death-metal lyrics into the face of a terrified front-row punter as part of a routine that started with small-talk at a bus stop  but there is one category you can put ONeill into: the one marked funny.’
CHORTLE