An Orchestral Rendition of Dr. Dre 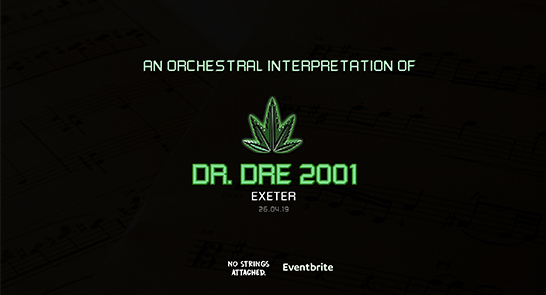 An Orchestral Rendition of Dr. Dre

This event was originally scheduled for Fri 3 Apr but has been rescheduled to Fri 31 Jul due to COVID-19.

An Orchestral Rendition of Dr. Dre: 2001

This body of work features so many intricate musical layers, we have brought in one of the UKs leading Orchestras to perform a complete rendition of the album and some of Dres west coast classics from start to finish.

Accompanied by DJ’s, singers, and lyricists – this is not your average Orchestral event.

This is no ordinary Orchestral event. Expect a full standing crowd, with performances from various DJs, lyricists and singers as well as a full Orchestral Rendition of Dr. Dres: 2001 album, followed by other of Dres west coast classics.

This is the combination of a traditional Orchestra merging with a modern live hip-hop music event.

Were extremely excited to bring this production in Exeter.

Note: Dr Dre will not be attending this event. This is an orchestral rendition event performing covers and renditions. This is a standing event.