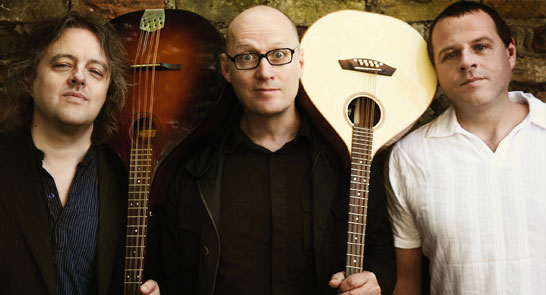 The album release is to be followed-up by a 24-date UK tour in November and December 2013. The support act on all dates has been confirmed as husband and wife folk duo, Trevor Moss & Hannah Lou.

Mud, Blood and Beer is the third beautifully-crafted album of classic punk and alternative songs loving reimagined by The Bad Shepherds in their distinctive folk style. Featuring re-workings of classics such as Madness Our House, The Jams Going Underground and a fabulous rendition of No More Heroes by The Stranglers, this is by far the most accomplished and diverse Bad Shepherds album to date.

This is also the first album to feature original Bad Shepherds material. The lyrics to title track, Mud Blood & Beer was penned by Ade as a homage to his new career as a festival musician. The closing track, Off To The Beer Tent, is a furious jig written by the band, which showcases (All-Ireland Fiddle Champion) Andy Dinan and (Long-time Nightwish collaborator) Troy Donckleys world-class musical talents.

The Bad Shepherds last performance was at The Union Chapel at the end of 2011. Wed been going since 2008, made two albums and done hundreds of gigs. We needed a break, to get a fresh perspective on things as much as anything else. Troy was going on a year-long world tour with the Finnish prog-metal band Nightwish, and Andy was starting a new band, Ducie. Knowing how the balls can sometimes drop forever when you stop juggling I wasnt really sure that wed ever really get back together.

I had some TV shows to make which bizarrely involved a move to revive Bottom. When the idea for the new Bottom series came we met and worked on it for a while, but pretty soon I realised it wasnt what I wanted to do  it felt too much like treading the same path again. Instead I realised that what I really wanted to do was get together with The Bad Shepherds again. Why? Because I am in love with the band. Because I love the sound we make. Because I love being with Troy and Andy. Because the best gigs Ive ever done in my life, in any art form – in terms of excitement and connection with an audience – have been with The Bad Shepherds