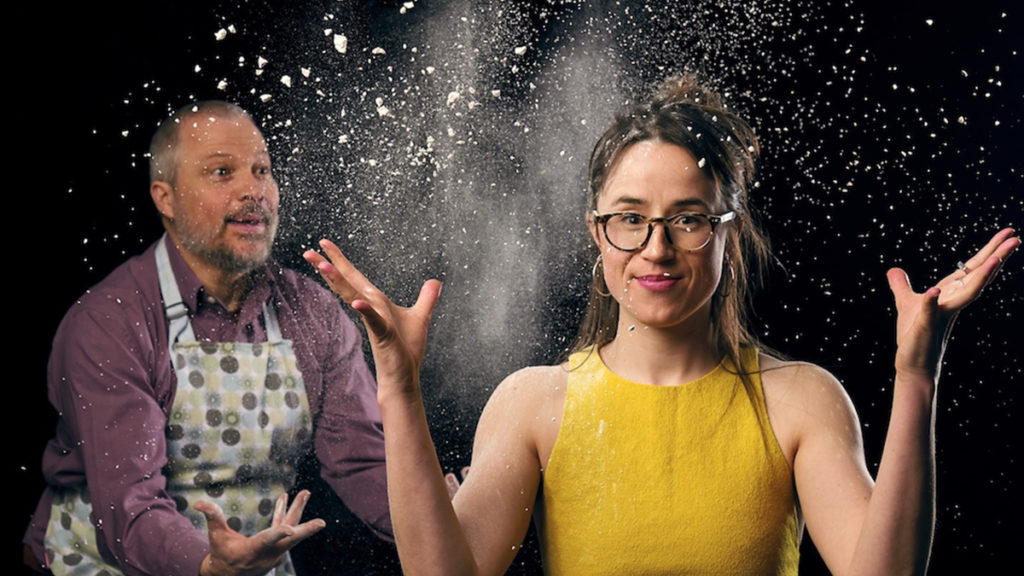 Hold On Let Go is a new show about memory from Unfolding Theatre, the company the Guardian calls ‘thrillingly talented’ with original songs by Paul Smith (Maxïmo Park), choreography by Liv Lorent MBE and dramaturgy by Selina Thompson (salt.)  Hold On Let Go comes to Exeter Phoenix Thursday, 12th May.

Following a successful run at Summerhall at the 2019 Edinburgh Fringe, Unfolding Theatre’s critically acclaimed show about memory and what we pass on begins a UK tour this spring, arriving at Exeter Phoenix on 12 May.

In a world of information overload, Hold On Let Go invites audiences to discover a new kind of memory champion. One that admits how much they’ve forgotten. One that bakes bread, dances on tables and might possibly get sucked into a black hole...

Alex is 56. Luca is half his age. Alex has an encyclopaedia in his head. Luca has one on her phone. Most of us forget most things, most of the time. What if we forget something important? Something that might make the world a better place?

Director Annie Rigby explains, “Hold On Let Go takes you on a journey that starts in a kitchen and travels to the farthest reaches of our universe. It explores how fragmentary and partial our memories are - both as individuals and society. From there it asks whether we might behave differently if we were conscious of how little we hold in our memories.

“It's a lovely show to be touring as audiences return to theatres, many for the first time since before the pandemic. It has a very welcoming and relaxed atmosphere, and serves its audience freshly baked bread. It makes me laugh to think that we made Hold On Let Go before sourdough bread became a lockdown cliché.

“It's brilliant to be touring the show in 2022, when it feels more relevant than ever. It’s a real celebration of live performance, with plenty of laughter, good stories and great music. It’s also the first time Unfolding Theatre has toured to Exeter Phoenix and that feels very exciting!”

Paul Smith has written original songs for Hold On Let Go - his first theatre collaboration. He says, “Music and memory is something I’ve been thinking about for a long time. We called the first Maxïmo Park album, A Certain Trigger because of how music can be an emotional trigger, taking you to places and memories. In Hold On Let Go, we’re playing with how a radio broadcast of songs and words, played within the show, can build an emotional connection with audiences.”

Led by Annie Rigby, Unfolding Theatre brings people together to experience stimulating new work that’s thoughtful, unexpected and playful. Over the last decade, the company has built a reputation for working with all sorts of people from different walks of life to make theatre with a wild sense of humour and strength of character. 2017 saw the company’s biggest national tour to date with Putting the Band Back   Together which premiered at the Edinburgh Fringe in 2016, “Fantastic - funny, big-hearted, moving and truthful.” The Guardian

As with all of Unfolding Theatre’s work, participation drives the creative process. For Hold On Let Go Annie and the team led workshops with parents and newborn babies and elderly people to explore how to capture the things that are usually forgotten in day to day life. Some of their stories feature in the show as listeners’ messages sent into Paul Smith’s radio station, Too Much Information FM. We hear about Jude who can’t remember what it feels like to be carried, Mary who remembers the sound of sea ice cracking, heard in the middle of a night in the hard winter of 1963. Alex bakes sourdough bread during each show. The sourdough starter is activated by the natural yeasts in the air of each performance. A piece of freshly baked bread is offered to the audience at the end of the show, as a tiny feast of now.

Tickets are on sale now for Exeter Phoenix 12 May. Book your tickets here >>