An Interview With Theatre Alibi’s Director 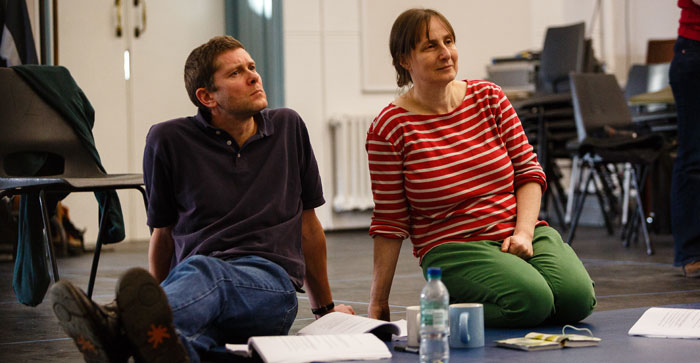 An Interview with Nikki Sved

Theatre Alibi return to Exeter Phoenix in February with a new show, Falling. The show’s director Nikki Sved has been involved with the theatre company since the 1990s and offers an insight into their latest show in the following interview.

What was the inspiration behind Falling? How did it come about?

Dan Jamieson, our Associate Writer was fascinated by a picture in a newspaper of a sinkhole, in Chile, I think, and started finding out as much as he could about them. Sinkholes are a completely extraordinary phenomena – huge gaping holes that suddenly appear, swallowing buildings, cars and people. Some are caused by erosion, some by things like mining, but they occur all over the world. The photo that inspired Falling was one of a modest semi-detached house in Cornwall with an enormous hole in its back garden. It’s the juxtaposition of the ordinariness of the house with such an epic event that’s terrifying. What would happen to you if you wandered out into the garden some winter’s evening and fell into that hole. It’s just so random, so at odds with any sense of security. Even if you are lucky enough not to be injured, the experience of falling would still be there to haunt you…the sense that the ground beneath your feet could open up at any moment. That’s what happens in Falling to Alice. The piece follows the teenage Alice and her mother, Claire, as they struggle to come to terms with what’s happened. At its heart, the play is about how we all have to cope with the unsteadiness of life; we none of us know what might be around the corner.

Can you offer an insight into the research process for the play?

Months before rehearsals for a new show, we have a period of research and development to kick off the business of turning a script into a living, breathing piece of theatre. We get together as many of the people who will be working on a show as we can – the writer, director, musical director, designer, lighting designer, sound designer and actors– to try things out in a creative and playful atmosphere, away from the pressures of performance. It’s an opportunity to talk about the meaning and flavour of the story, so we all have a shared sense of what it’s about and to test out the script. We also get the chance to put things on their feet, giving us a real sense of how the show might look and sound. With Falling, a piece began to emerge that had a really intimate and raw feel. The means we were using to tell the story had a rough simplicity – the flash of torchlight as the actor playing Alice clung to a table edge and the electric guitar echoed, for example, gave a vivid sense of Alice grasping at the rocky sides of the sinkhole in the darkness.

What can audiences expect from the show?

It’s a story with a very powerful heart because most people can identify with what’s happening to Claire and Alice. In some ways it’s everyone’s nightmare, but it’s not a spoiler to say that there’s an optimism in there about the way in which people can recover from a shocking experience. We hope audiences will enjoy the strong visual elements achieved through projection, physicality and Trina Bramman’s wonderful set. And music is, as always with Alibi, a driving force in the show. Our Composer & Musical Director, Thomas Johnson, is working with electric guitar, because of its range – it can be tender, terrifying and hugely evocative.

How challenging is it to combine all the elements of music, puppetry and projection into a play?

I find it one of the great pleasures of creating new work. Of course, there are very real practical and technical challenges involved, but I’m so lucky to be able to draw on the wealth of experience and expertise that there is in the team. We work very closely together – our composer Thomas has his office right by the rehearsal room, so he can write music in direct response to the work I’m creating with the actors. The Design Team’s workshop is next to the rehearsal room and so puppets and props fly between the two and can be played with and adjusted as necessary. Duncan, our Projection Designer, is in the room with us trying things out as we go. It’s an incredibly integrated approach – which allows us to tell each part of our story with the most effective means.

You’ve been involved with Theatre Alibi since the 1990s, initially as a performer and now as Artistic Director. What’s been the highlight of your time with the company and how do you see Theatre Alibi developing in the future?

There have been so many highlights, from creating Birthday, a beautiful piece about Marc and Bella Chagall, in the early 90s, (soon to be revived at The Globe Theatre retitled The Lovers of Vitebsk) to taking Michael Morpurgo’s I Believe in Unicorns to Philadelphia last year. I’ve loved the sheer variety of our work -on the one hand taking shows into some of the tiniest village schools in Devon and, on the other, placing shows on stages like the Harold Pinter Theatre in the West End. But often the highlights are very simple ones – seeing a deaf child absolutely captivated by the violin during a performance or hearing from an audience member whose direction in life was changed utterly by seeing one of our shows years beforehand. In the end, that’s why I do what I do. As a company I hope we keep growing and learning. I’m very excited by a show that we’ll doing soon, which will have both Deaf and hearing performers in the cast. And I’m really looking forward to working on The Boy Who Climbed Into The Moon, based on a story by the wonderful David Almond.

You’ve worked with Daniel Jamieson (the writer of FALLING) on many shows, what do you think is the key to a successful working relationship?

Yes, the relationship with Dan has been a real linchpin for me and, of course, the company. We know each other inside out, but I think what I appreciate most is that we listen carefully to each other, try our level best to understand the other’s perspective and ultimately we trust each other. It’s too easy for a longstanding partnership to make things rather safe – which isn’t a good thing when you’re making theatre – so what I really appreciate is that Dan encourages me to take risks. And together, I know, we can negotiate the most scary and exciting of terrains.