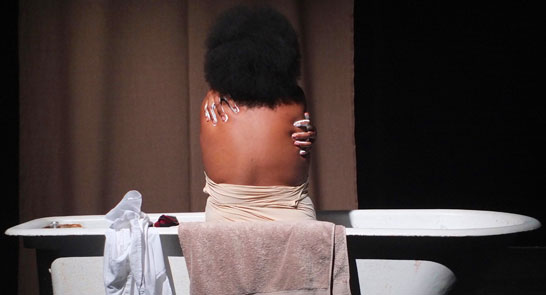 The production was commissioned by Bernie Grant Arts Centre in Association with Hull 2017.

I see the way that butters-fat-lipped-troll-Patrice looks at him, now shes the kinda lighty that finks shes too nice.

Evie is thirteen and lives in Neasden with her Mum. She wants to tell us about something her crush on Lewis, trying to be a woman, friends, virginity, garage remixes, hello kitty underwear an Uncle lurking in the corner of her story.

She wants to make us laugh, shes pretty good at it. She wants to tell us something, but she darent let it out.

Based on a true story, Yvette is a one-woman show with original music about a stolen childhood and growing up with a secret.

There will be a collection for Rape Crisis UK after the performance.

Yvette was first developed at East 15s Debut Festival, a pioneering and unique event dedicated to the staging of new plays written and directed as well as performed by graduating students on the acclaimed CT course (BA in Acting and Contemporary Theatre) developed and led by Uri Roodner.

‘A winning and poignant work. Its sad and defiant, laced with humour and music.’  ????
THE STAGE