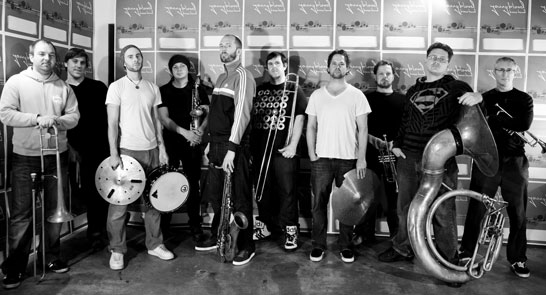 With support from Zura Auri

Youngblood Brass Band flouts convention in an ecstatic, raucous, incendiary fashion, taking the form of a New Orleans brass band and morphing it into a punked-out hip-hop behemoth of groove and purpose.

The ten-member ensemble, born in Madison, Wisconsin, now hails from all over the US (Madison, Brooklyn, Nashville, Minneapolis, Chicago) and has been unleashing their crash course in genre-bending on stages worldwide since 2000. What other band can claim the honour of having their music spun by DJs like Questlove (of The Roots), working with hip-hop luminaries like Talib Kweli, having their original compositions performed by student marching bands and jazz ensembles around the globe, and still not be out of place at a punk festival? What other band brings together the ostensibly disparate worlds of the trombone geek and the backpack b-boy?

Youngblood has headlined countless tours in the States and abroad, selling out dates in over 20 countries. Their festival résumé reads like a list of the heaviest music events in the world: Roskilde, Glastonbury, Lowlands, Pukkelpop, SXSW, CMJ, North Sea Jazz, WOMAD…ad infinitum. Whitehot live shows secured the bands status as an incredible group to witness, whether in an intimate club setting or in front of thousands on a festival stage.

‘These brassmen will blow your mind‘
JAZZTIMES

‘The Midwest’s answer to The Roots‘
THE NEW YORKER